Blacktown City Council went out to market with a view of finding the ideal designer who would understand their brief and deliver a high quality, visionary space. For us it was a perfect opportunity to utilise the site and deliver a project which not only created a purpose-built extension to existing works depot but also delivered much more in the social and environmental context.

The Council faced a challenge in terms of ill utilised and limited space with ad hoc seating and chaotic interaction and they wanted to add more space to their administration building at Rooty Hill Depot. The existing building was a typical brick building with a tired looking façade, in desperate need of a face lift and needing a significant update both to the exterior and interior to make a it a functional, contemporary and efficient workspace. Adding to an existing fabric is always a challenge but when the client is open to innovative ideas it can lead to an exciting project.

Given its industrial past, we explored the new massing to not only retain its identity but also amplify its character by giving it a rugged yet modern presence. The interior layout was structured with clear demarcations for different departments without necessarily adding physical barriers to allow for easy interaction.

The main façade of the new extension facing the street was proposed to be full glass for visibility and light. This was however due west, which presented a challenge that we resolved by designing a breathable second skin which would not only buffer the western sun from hitting the glass but also provide a services corridor internally. The roof massing was extruded at high level which creates a visually dynamic presence. It also plays a very important role of creating a shading device for the glass on the western façade.

The roof of the new extension was designed as a skillion roof to bring in day light from the east. It brought in a lot of natural light into a rather dull workspace of the existing admin building before the proposed extension. The result is a light, contemporary and ordered workspace with all the required amenities to satisfy the employees.

In a typical works depot environment, a distinct layer of social dynamics comes into play. While the brief specified not only separate work zones but also separate breakout areas, the challenge for us was to bridge these social gaps. We wove these gaps together by clever use of spaces that are separate yet seem to merge into each other. Integration of different departments in the depot was skilfully brought together by careful planning and visual cues. We were inspired by the colours in Council branding and provided a vibrant interior throughout bridging the social gap with equality. On a micro level there was another challenge of meeting the expectation of each stakeholder who had a unique requirement for each of their desks. This was resolved by funnelling all requirements into the development of a workstation module which would satisfy most end users.

Working with existing fabric of the building was also a challenge. The solution was to design the layout maintaining existing columns and extending in a way that allowed an effective floor layout. Externally it also gave an opportunity to have a dominating presence which was a total contrast to the existing dull building.

While the use of the of existing building presented a challenge it also was a good opportunity to keep sustainability at the forefront of this project by integrating the extension effectively and reusing the external fabric such as bricks and roofing sheets. The extension was planned to maximise natural light in the workspace.

The large glass on west would result in a significant heat load if it was left exposed. The extruded roof design acts as a shading device for the glass. In addition, the west façade is shaded by a perforated metal screen that acts as a second skin, protecting the full height glazing from the low western sun.

The existing solar panels were relocated and reinstated after construction. Some of the mechanical ductwork was reused in the new design. LED lighting and water efficient taps and fixtures were specified throughout.

One of the key sustainability aspects of this project was the use of locally manufactured custom joinery and furniture for the office fitout by the Australian company, Dezign. 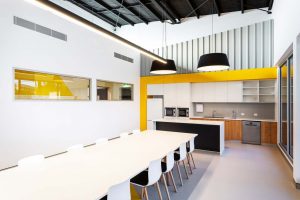 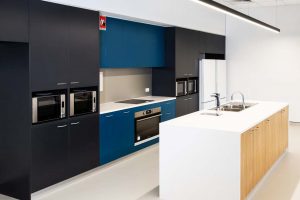 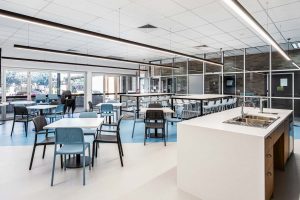 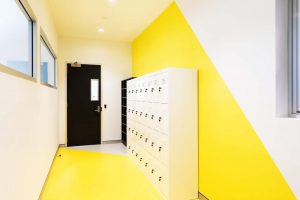 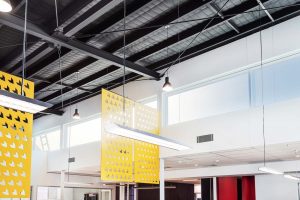 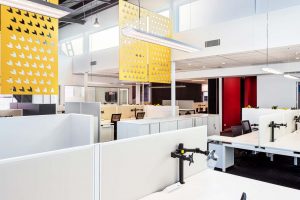 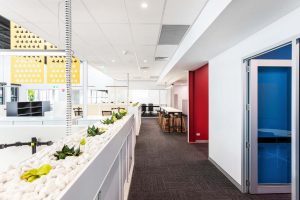 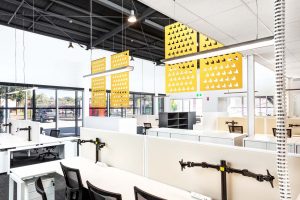 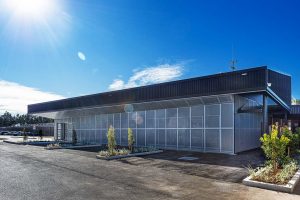 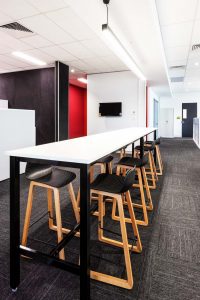 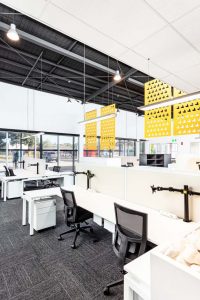